Every purchase makes a difference 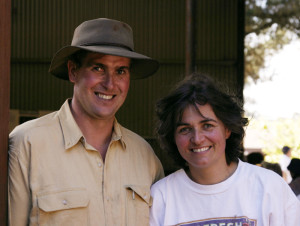 Nicholas and Fiona Chambers farmed in Daylesford from 1988 until 2013 after graduating from Dookie Agricultural College.  In 2013 they relocated to be closer to Geelong where Fiona is a Lecturer at Marcus Oldham Agricultural College. The relocation has enabled them to begin to expand Fernleigh Free-Range as a specialised rare breed and free range meat business.

Fiona and Nicholas have had an extensive farming career that includes farming organically at their Daylesford property from 1990 – 2012, exporting organic carrots to Japan for 8 years,  negotiating  a national supply contract with Coles supermarkets for 10 years and breeding Wessex Saddleback pigs for 17 years. They were the first people to have certified organic pork in Victoria, the first in Australia to export certified organic carrots to Japan and the first organic producers to negotiate a national supply contract with Coles.

With a passion for conserving rare and endangered breeds of farm livestock, they began selling meat from Wessex Saddleback pigs in about 1998. Fiona is a founding director of the Rare Breeds Trust of Australia and in 2004 became a director of the Rare Breeds International world board.  She has delivered papers on the subject of sustainable farming and the conservation of farm animal genetic diversity at conferences both in Australia and overseas including UK, America, Germany, Fiji & Vietnam.

Nicholas and Fiona have been awarded a number of awards and fellowships in their 26 year farming career including;